Lately Dad has been enjoying his early morning bike rides and one morning I decided to join him. Little did I know that what I had instore was much more than I had bargained for. We had planned a nice bike ride around the lake and into the town of Argentat-sur-Dordogne, in central France, where we would meet the girls who had biked the short way from the camp ground for breakfast.

Me and my Dad woke up at 7 am in the morning. We had 2 speculoos biscuits and then headed on our way. We biked out of the campground and found out that one of the roads that we were meant to take was closed off because of mines (the picture showed explosives so we didn’t take that road). We ended up going up the road a little bit more and found an old donkey trail that we decided to go up. We went up the track and soon found out that the track was a seemingly never ending climb, with rocks and holes and all sorts of obstacles on the track. We continued to climb up but when we were about half way up it got too steep to bike any further and we had to walk the rest of the way up the hill. At the top of the hill there was a small little vintage village that was built around a farming community. We biked through the town and then we connected to a main road that we biked along for about a km before turning off down a small road.  At this point it was about 28 degrees Celsius.

We headed down the road. As we progressed it got steeper and more unused. By the time we were 2 thirds of the way down it was completely grown over and fallen trees blocked some of the path. After a wee while longer we were finally rewarded for our effort – there it was a proper road. We went onto the road and biked up the road but when we reached the end there were two big fenced off power lines with high voltage power signs blocking the way. We were within 20 meters of the road to town. We could see the road and the cars zooming past. We looked around for a way out. We searched the whole road from top to bottom and we were rewarded with the realisation that there was no way out. We were within meters of our destination and yet we couldn’t get past. We turned around and went up back the way we had come. With only 2% of phone battery left we followed the way we had come down the hill.

We walked our bikes because of how steep the overgrown road was. At this point it was about 35 degrees Celsius and we were walking up a hill. After what felt like hours we finally arrived at the top of the hill. Realising that it would take over an hour to reach our destination, we changed our mission from getting to Argentat village to getting back to the campground. We retraced our steps back to the old vintage village and biked down the old donkey trail. Going down made my arms feel like they were going to fall off. When we finally arrived back at the campground it was quarter past 11 and our short 2 hour bike ride had turned into a long 4 and a half hour bike ride. 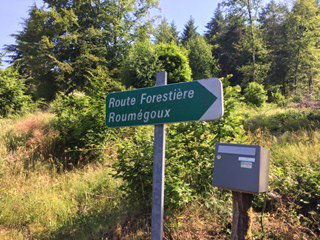 3 thoughts on “Misadventures with Dad”