As keen sailors who have bare-boated in a few different places around the world, we were pleased when our friends Ellen and Matthias suggested a four days tour of the Dutch inland seas the Ijsselmeer and Markermeer. We expected a fun adventure and were not disappointed.

Both the Ijsselmeer and Markermeer are manmade – quite an engineering feat. The Ijsselmeer was created in the 1930s by a 32km Dam and covered over 1400km2 with an average depth of 5.5m. In 1975 the Ijsselmeer was split in two to form the Markermeer (700km2) and Ijsselmeer (1100km2).  The water level is higher than the surrounding water courses  – so we were often sailing along looking down on houses and farms and the marinas were often behind a lock.  It was quite an adventure navigating a 33ft yacht through the locks and waiting for the traffic lights to give us the all clear to move out.

It was quite a different sailing experience for us.  The sailing conditions were perfect when we had wind, not a hill in sight, resulting in a near constant breeze (it was also hot and sunny which added to the appeal for Nik and the kids, who at one point leaped off for a mid-sail dip).  We did have a number of quick light air wind direction changes, which placed some challenges for Captain Matthias and navigator Ellen. 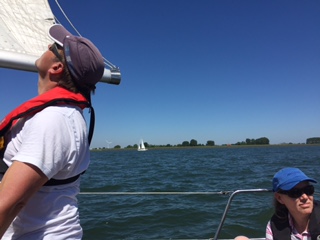 It maybe a stereotype, but the Dutch and Germans appeared to be excellent technical sailors.  Our skipper and navigator could re-count all the steps required for a man overboard manoeuvre while sailing and we were required to exercise these a different times on journey – fall off the wind for 6 boat lengths, tack through the wind and approach the man overboard at half speed, when two boats lengths leeward of the man overboard head into the wind and retrieve the man overboard.  Emilie executing a very good surprise solo man-overboard exercise as we sailed into Hoorn.

With no bays to anchor in, everyone retires to marinas for the evening. The Dutch are masters of marina manoeuvring! Each marina we stayed in was highly tidy, very organised with excellent facilities.  It was surprisingly quiet.  We enjoyed wandering around the historical seaside villages and eating ashore most nights.

2 thoughts on “Sailing in Holland”