Do you know how goat cheese is made? Well I didn’t up until we were in Freising, Germany. We were staying with our German friend Marc. Marc specialises in artisan cheeses and organises training courses for cheese makers. On one of the days that we were hosted by Marc he took us to one of his friend Hans’ goat farm. When we arrived we were greeted nicely by Hans. After we had met, we went to have a look at how the cheese was made. Traditionally you look at the cheese being made before you get to see the animals. Before we went into the room where the cheese is made we had to put gumboots on because it was a food production area and hygiene is their number one rule.

When we were inside the cheese making room Hans showed us how the cheese was made and what machines they use to make the cheese. He also showed us the two rooms where he stored the cheeses. One was for soft cheeses like camembert and the other room was for hard cheeses like cheddar. We tried some unmatured camembert. 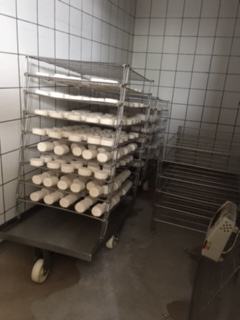 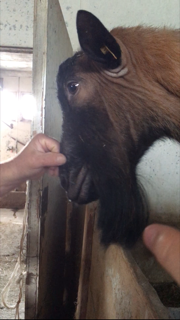 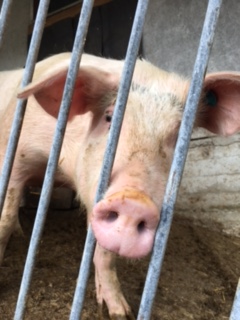 Then we walked on to see the cows .The cows are used for eating up the old and surplus hay. Then we went and saw the older goats that they milked. Hans told us that the really brave and cheeky ones were teenagers and the more shy ones were the pre teenagers.Hans let us go inside the pen with some feed so we could feed the goats. Em threw some feed and it came back all over her. There was one especially cheeky goat that kept on jumping up onto my back and that same goat started chewing my sister’s hair.

Overall every animal they kept on the farm had a purpose. The baby goats to be the next generation of goats to be milked, the billy goats for breeding, the pigs for eating the left over whey from the cheese production, the cows to eat up the old and surplus hay and the older goats to be milked so they could make cheese.It amazed me how all the animals could have a purpose. All the animals except for the few cows they have are allowed to go around the farm but are back into their pens at night time and rainy days. The farm was much  more different than farms back in NZ. They are all a closed system. Basically, everything they need is produced there on the farm. 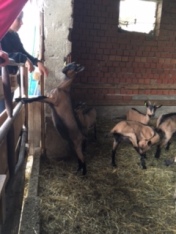 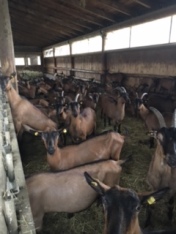 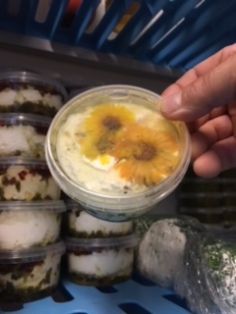 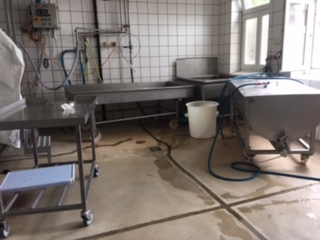